A comprehensive guide to what every blend mode does and how!

Ever wondered exactly what all those blend modes do?
Here’s a very detailed guide explaining exactly what goes on and what makes them different!

The interaction between your layers is important, the exact effect depends on what the blend mode selected does to “add” every pixel that is stacked ontop of or below another.
There is the hit and miss approach; to try them all and see what looks best; but knowing what you can acheive with each one will not only make the process faster, but you won’t be distracted by other posibilities taking you away from your original idea or concept.
Important to remember, is that the Opacity and Fill settings of the layer are also vital to the effectiveness of a blend mode, which could look awful at 100%, but perfect if lowered. 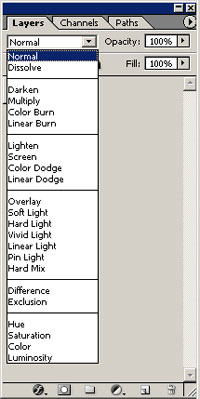 Normal
This only has a ’blending’ effect with reduced opacity – but it should not be overlooked, as the effect given cannot be produced with any other mode.

Dissolve
I can see no use for this, ever. If anyone has suggestions, please put it in a comment or send me a PM; I’ll add it in and give you credit at the bottom 🙂

Darken
This mode applies only dark pixel areas from the top layer onto the bottom – This mode is (perhaps oddly) not used to darken a picture, but to impose one on another. To darken an image, you could try using Multiply.

Multiply
Equivilant to placing one colour slide over another – densities multiply, and so the image darkens. This can be used to recover images that are too light by duplicating the original layer and setting the upper (duplicate) to multiply.

Colour Burn
By increasing colour saturation and contrast, this mode gives very striking results. It also darkens a little, but be aware that this mode often produces colours so extreme you cannot print them accuratly – ie out-of-gamut for printers.

Linear Burn
Causes darkening to the lower layer in order to reflect the blending layer’s colour; by decreasing brightness.

Lighten
This mode applies only light pixel areas from the top layer onto the bottom – This mode is (perhaps oddly) not used to brighten a picture, but to impose one on another. To brighten an image, you could try using Screen.

Screen
Like projecting 2 or more slides together onto a screen from different sources – Lightness of corresponding pixels is added, giving a brighter image. This can be used to recover images that are too dark, by duplicating the original layer and setting the upper (copy) to screen – then adjust opacity to suit.

Colour Dodge
Similar to Screen, but black on the top layer has no effect on the image, and all other colours will tint those underneath as well as increasing colour saturation and decreasing contrast to match the correct tone. Useful for creating strong results.

Linear Dodge
The same as Colour Dodge, except it matches the colour by increasing brightness.

Overlay
Overlay mode mixes colours evenly from layers, very responsive to opacity changes. It works by screening light areas and multiplying dark areas. At a low opacity it is similar to Normal, but with more intense colours. Very useful for adding textures to images.

Soft Light
This lightens and darkens image colours depending on the blend colour. Similar to shining a diffuse spotlight on an image, a very effective way of making tonal adjustments – lower opacity gives a more subtle effect.

Hard Light
Generally not used as Soft Light has a more controllable effect, but this will darken an image if the blend colour is dark, lightens it if it is light and increases contrast.

Vivid Light
Effectively, this mode is like a blanket burn & dodge – burning the dark areas of the blending layer on the lower, and dodging the light areas in the same way. Appearance is like adding different amounts of contrast in the image.

Hard Mix
Gives a result similar to pin light and setting contrast to its maximum. The result is very harsh colouring in large patches.

Difference
Very useful for creating dramatic effects – it reverses tones and colours together, with the brightness of the result depending on the difference between corresponding pixels. Thus, two identical images will result in pure black, however white on black will result in pure white.

Exclusion
A softer version of Difference; gives less contrast, whites in the blend image will invert on the lower layer – and similarly, blacks will do nothing.

Hue
Here, the top layer’s colours are combined with the lower layer’s saturation and brightness. This gives a strong tone effect, but can be weak if the images are not suited for the mode. A possible altnative mode would be Colour.

Saturation
With this mode, the saturation levels of the lower layer are changed to that of their corresponding pixels above. Useful to make an object take up the colour or pattern of another.

Colour
Only the brightness of the lower layer is used, as both colour and saturation from the upper layer are transposed onto it. If the effect is not quite as desired, try Hue instead.

Luminosity
The third possible combination of these last 3; Only luminosity of the top layer is kept, colour and saturation come from the lower image. If not suitable, try one of the other replacement modes above to find your desired result.

Right… I think thats them all covered! :omg: If you would like further information or help understanding aspects of this topic, please post in the Tutorial Talk Forum.

I live in Northern Ireland, currently still in school studying to do Sonic Arts at university. Enjoy photography (Nikon D70) and Photoshop (Cs), aswell as playing bass in jazz bands and singing choral/classical works.
Check out my Profile/Gallery for more tutorials and to see my work.