This tutorial will teach you how to paint an almighty snow dragon in Photoshop.

First off, this tutorial is done with photoshop only, and only interresting for people, how know this program well…

because i cannot explain every little step here, but what i can do is, to show how i work out this little cyberdragon, from pencil to finish, in just 3 hours.

I?ll start with this plain sketch: 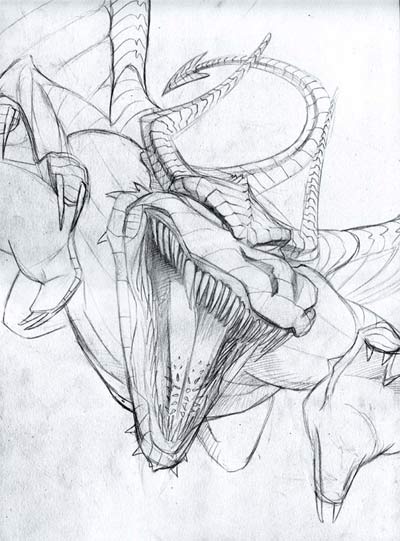 This rough sketch is done a while ago, but i picked that motiv up, to workout for a contest now 😉
The first and important thing i do is: scanning this piece, its like din A3, so this are two parts to scan with my small A4-scanner…how to do that will fill another tutorial, with which i probably come up next time… 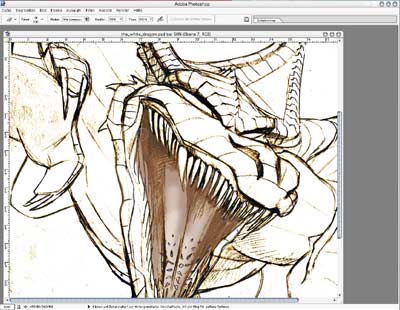 After a slight colortone-correction,and adding more contrast, i begin directly with a new layer to draw the red parts, like : mouth, tongue and eyes. With just a simple circle brush, and 20% color-transparency.

the first layers i use only the flat,hard edge-brushes, later on the details and shadows, i use the Airbrush.
Just a hint; i used to make a copy of the pencil drawing, and give it a gamma-interpolation, to have more homogenous strokes in the endresult, without drawing every line again with the wacom;-) 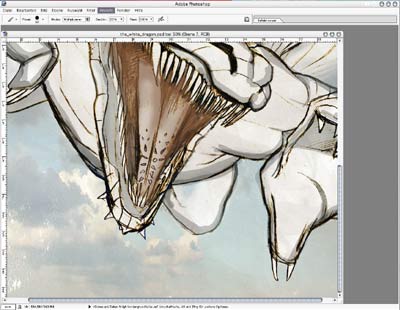 When i put a Reference-photo onto the background, i use the pipette, to pick up a color from the grey clouds, to paint the edges of the dragon with, the big strokes are with 15 percent, and the small strokes with 30 percent, by overlaying the fat ones.

I also have erased the edges from the photo, to become a feeling, how it will look…on this stage, i can also search for another image, to compare the mood …. 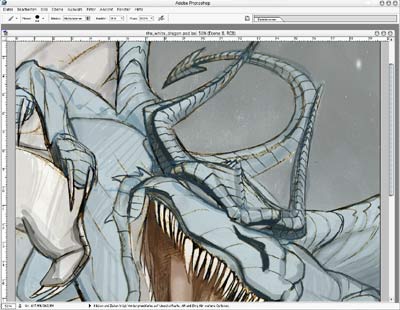 Now i add the first color to the skin( or whatsoever)i try to fill the skin, with one big brush, and 30 percent of the blue colortone, the shadows will get a double portion. The inner parts of the wings and hands were worked out with a tone similar to the mouth, but with mor greyness. 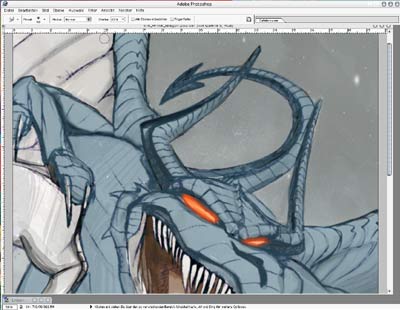 The eyes become life, when working them over with some small copied and pasted pieces of the mouth, which are combined with eachother, with some layer-effects, like negative-multiplication,etc… the smear-finger is a very helpfull tool, to make smooth lines off hard edges and it doesn?t need to process heavy if its used with 50-80 % pressure. 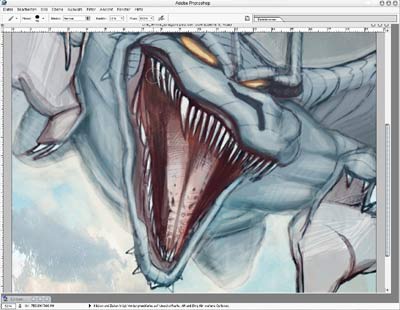 This is my favorite-part, integrating the foreground into the back! with a yellow-white, and a slight bluetone, i add strokes, to add movement into this image, also the highlights on the body and the small
plates were done with a big and one tiny brush… The mouth has become another layer, to add more depth, and for the lips. 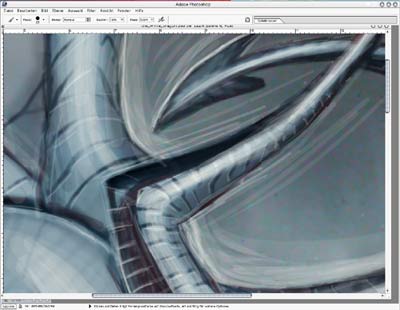 To bring finally the right power, movement, and temperament into that still, i add those comic-like “speed”-strokes, with the same bright tones as in the step before.

The last step is to duplicate the finally on one layer reduced image, and add blurr to it, then i just erase the parts of the new layer, which should look clean and near, the other were blurry… 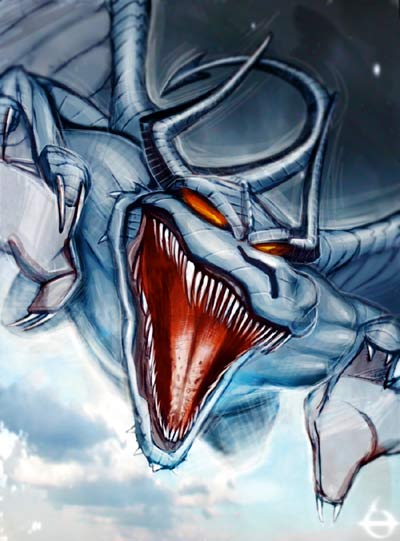 After the layer get reduced a last time, just a final colortone-correction…